I fell in love with The Phantom of the Opera back when I was in high school. The first time I saw it, a friend had organized for a bunch of us to join a bus trip to Toronto to see it at the Pantages Theatre. I really had no idea what the story was about, so on the way up I read the book by Gaston Leroux, and I was really glad that I did because it gave me a much better appreciation of what was going on on stage.  I fell in love with the spectacular music, and the beautiful costumes, and the venue made it a special experience.

The second time I saw it was not long after the first. I was 18, and my youngest sister and brother are 7 and 9 years younger than me, respectively, and they were going on a class trip to see Phantom, again at the Pantages Theatre in Toronto. The school was looking for adult volunteers to accompany the classes, and I went as one of those volunteers. To be honest, there were almost more parents than there were kids on that trip (I think there was a bit of a conspiracy there) so I ended up supervising my brother and sister while we spent some time shopping at a nearby mall until the show started. I still remember it as a really fun time with them, and once again the show was spectacular.

Over the years I’ve listened to the music so often that I know almost every word, and I’ve watched and rewatched the movie so many times that it’s a wonder it still works.  Over recent years I had wished for the opportunity to see it performed live again, so imagine my happiness when I realized a few months ago hat the Broadway show of Phantom was coming to the National Arts Centre here in Ottawa. I looked into tickets, but even though I really wanted to go, I told myself the tickets were too expensive so I was prepared to pass on it.

One evening at the end of September I mentioned to my friend, Brigitte, that I had kind of wanted to go see Phantom at the NAC but that the tickets were on the expensive side, so I had decided against it. All it took for me to change my mind was for her to say that she would go with me if I wanted to see it, and that weekend I was looking for tickets. I think I was using the price as an excuse because I didn’t want to go alone. 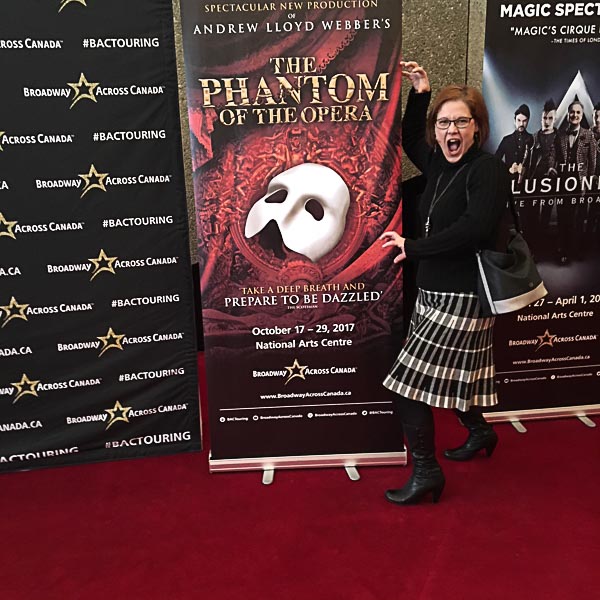 At any rate, on October 26th we went to see Phantom, and it was everything that I remembered! I vaguely recall being to the NAC when I was in high school but I had I forgotten how being in that huge theatre with the balcony, and boxes, reminded me of something out of a Regency romance novel. And there is nothing like seeing a beautiful musical like Phantom with a live orchestra performing.

Do you like live theatre? Do you enjoy musicals? Do you have a favourite?  What have you seen, or wish you could see?

23 thoughts on “A Night at the Theatre: Phantom of the Opera”