I finally tried out a new recipe this week (in addition to the one I made for the Fantastic Bake Along), but before I get to the recipe I have an update and a before and after picture. My friends on my Facebook page have been bugging me for a while for a before and after photo, but I live alone and I can’t get the right angle for a full body picture, so all I have is a facial side by side comparison. Still, I think you will agree that the change is noticeable..

Now for the update. Progress was slow this week, but I lost a further .3 lbs, and any loss is a win!

On Tuesday night last week, roasted an acorn squash in the oven. I cut it in half, drizzled 1 tsp of sesame oil, and 2 tsp of honey over the two halves, then roasted them in the oven. On Wednesday, at lunchtime, I was looking for something to eat and decided to use one of the halves to make a small pot of soup.

I’ve never made squash soup of any kind, so I used this recipe from allrecipes.com as a guide. Since I made a smaller portion, and changed the recipe a bit, here is my recipe.

If your acorn squash wasn’t roasted previously, use half of an acorn squash, with the seeds scooped out. Drizzle 1/2 tsp sesame oil (or some other oil), and 1 tsp of honey over, and roast it in the oven at 350 Farenheit until cooked. Scoop out the flesh, mash it up and set it aside.

Spray the bottom of a stock pot with the cooking spray, or use 1/2 to 1 tbsp olive oil. Heat the pan then add the onion, carrot and garlic, cook the vegetables until they soften.

Add the chicken broth, squash, salt and pepper. Bring to a simmer, and cook for 20 minutes. (Those black bits you see are because my cooking spray turned dark on the bottom of the pot, and came loose when I added the broth, but happily it did not affect the taste once it was blended in in the next step.) 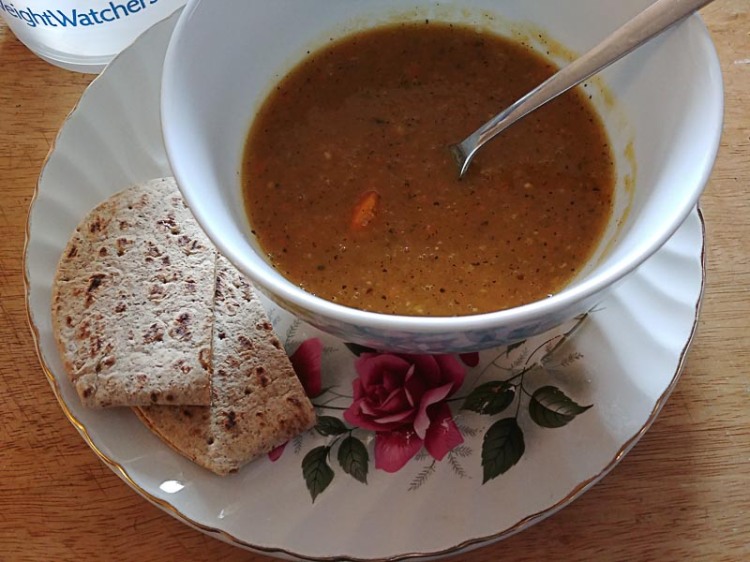 Just a note that I did not omit the cinnamon and nutmeg from the original recipe for any particular reason other than I didn’t have any nutmeg, and I just decided that I would skip the cinnamon , since I was skipping the nutmeg. I’m happy to say the soup was still very tasty. So much so that I added another acorn squash to me shopping list so this will probably be back on the menu sometime this week.