My crafting has been slower than usual lately. I’ve been putting in a few extra hours at work several days a week, and so my works in progress have suffered.

In recent weeks I finally finished my first quilt top, but now I need to get some practice doing some free motion quilting. I also need to practice my cutting and piecing skills to improve them before I start on my next (already selected) project.

To that end, I started this mug rug a couple of weeks ago using scraps from my first quilt. I still need to add a border, and get some backing fabric for it before attempting to quilt and bind it, but I had fun putting it together. I had some extra 1 1/2 inch wide pieces that I had cut for my quilt, so I cut them down to 1 1/2 inch square blocks and sewed them into this. I love it so much that I’m sure I’ll make a few more using this fabric, if not this same pattern. 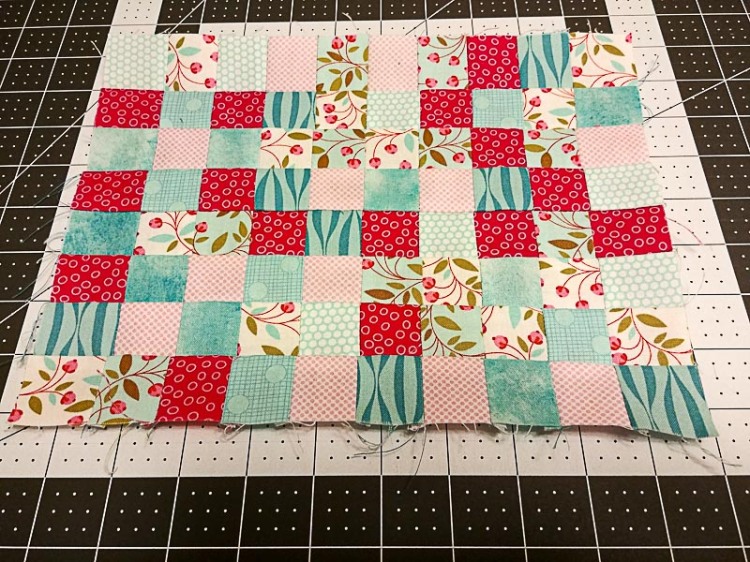 I’m not sure if I’ve told you this but at the end of February 2018, three of my friends and I are booked on a crochet cruise with The Crochet Crowd! We are really excited about the trip. None of us has cruised before, really this is my first travelling holiday ever, so it will be an awesome experience.

As part of a homework assignment for the cruise, we were recently asked to provide nine 10-inch crocheted squares, which we will then piece together with squares provided by other cruisers, to make blankets for Project Linus. I have put most of my other projects on hold so that I can get my nine required squares done, and maybe have time to make a few extras.

I’m using this free pattern that I found on Ravelry as the starting point for my squares.  I’m making it in various colours, and changing up the colours of the dog and it’s ears as well.

Last weekend I had 6 blocks done, as well as my initial practice block. After making the practice block I decided to crochet the nose and eyes as separate pieces and sew them on, rather than embroider them. I also had to make a few changes to the square to make it meet my 10 inch square requirement. 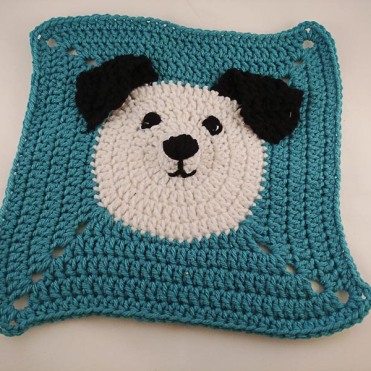 That’s my practice square on the left, alongside a finished square with the sewn on pieces. I added just a touch of white to the eyes to give it a bit of a reflection because the pure black made it look rather lifeless I thought. My 9 base blocks are all complete now, I just need to add eyes, nose, and ears to the other 8 and they’ll be ready to block.

What do you think? Do you think a child would be happy to receive a blanket with one of these puppy blocks on it?