I have been determined on this journey that I will not treat it like a diet, so that means that occasionally I’m entitled to eat a nice dessert. My only concession is that if I’m making it myself I try to cut back a bit on some of the sugar and fat in a recipe if possible. Last week I decided to try my hand at a slightly lower calorie apple crisp. I also made it in an individual serving size so that I wouldn’t be tempted to overeat.

I found the original recipe here. I did make the original before trying to reduce the sugar and fat content. Both versions were delicious. The original was quite a bit sweeter, and the crumble probably held together better, but I really liked my version. I like my apple crisp a little more tart, and the crumble, although it was not as chunky as in the original due to the lower fat content, really didn’t taste any different.

For the filling, peel, core, and slice the apple into a bowl. Add the sugar and cinnamon and toss until the apple slices are well coated. Place in a lightly greased (I used spray oil) oven safe dish. 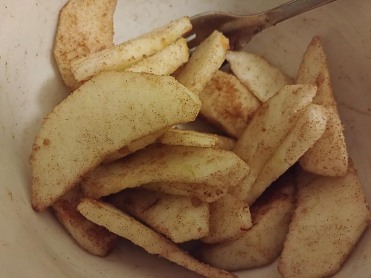 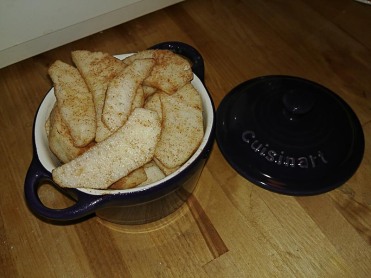 For the topping, place all the topping ingredients into a dish. using a knife or fork, cut the butter into the mixture until it’s crumbly. Add the topping to the top of the apple mixture. 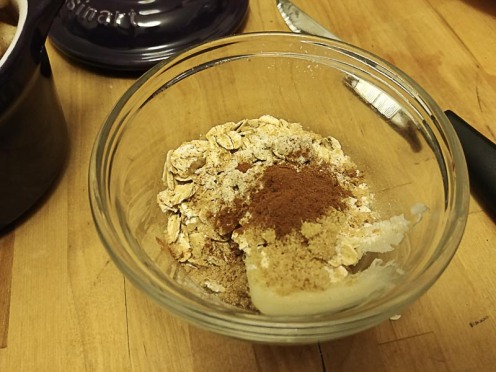 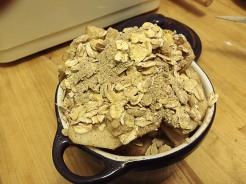 Place in oven (I use my toaster oven, since I don’t want to use the big oven for one serving) at 350 °F for 30-35 minutes, or until browned on top, and the apples are soft. And voilà! Yummy apple crisp for one!

And I finally passed my latest goal of 80 pounds! Although when I weighed myself last Tuesday, I had dropped a pound and a half overnight, I figured it was too good to be true. That or it could have been that I wasn’t drinking my water, and moving enough the last part of the week. Any way, I had bounced back up a little when I weighed myself on Monday morning (my weekly weigh in day), so my total loss for the week was .9 pounds, for a total of 80.8. I’m still pretty happy, and I’m 5.2 pounds away from 200. I’m not so sure I will make that goal by Christmas now, but maybe by the time 2018 hits! That gives me three weeks to lose just over 5 pounds.