Before I get started I want to apologize to any of the bloggers I normally follow. I have gotten so far behind on my blog reading that my email inbox is overflowing and has had me avoiding it because I never seem to make any progress catching up. As a result I’ve made the decision to empty my inbox, so that I can start fresh. I’m sorry that I didn’t get reading all of your blogs, but I will try to do better in the future.

I’m almost a week behind again, but I finally have my computer all set up, so I have no excuses for not blogging now. Last week was another good weight loss week for me. It wasn’t an extreme loss, but it was another step in the right direction and all those small steps are adding up! Last week I lost 1.3 pounds for a total now of 104 pounds, and only 32 to go now!

This past week I tried a new recipe which was not necessarily Weight Watcher friendly, but at 4 points per serving, it wasn’t completely awful points wise. You can find the full recipe at Sweet Peas and Saffron at the link provided. I used the Instant Pot version of the recipe, but if you don’t own an electric pressure cooker they also provide a instructions for cooking on the stove top.

I followed the recipe pretty closely except for the following substitutions. Number one, I used chicken broth in place of vegetable broth, so my version of this soup was not vegan. Number two, I used oregano in place of thyme because I didn’t have any thyme in my cupboard. And number three, I noticed from the photos and the stove top instructions that they added celery to that version, so I tossed in a couple of stalks of chopped celery. 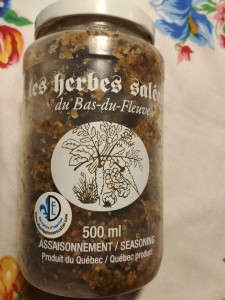 If you’re like me, I was worried that the coconut milk would overpower the soup, but I couldn’t taste it at all, which was great, because coconut is not my favourite flavour but I wanted to try it out so that I would know for future recipes containing coconut milk.

I found this soup a little bit bland tasting made as directed, so when I reheated for other meals I experimented a bit and found that adding a few shakes of Tabasco sauce, and a bit of Les Herbes Salées really helped the flavour.

I hope you don’t take my negative comments to heart and give this soup a try. With just a few adjustments I think it would be really spectacular, I will definitely be making it again!