It feels like it’s been forever since I did a crafty post…I don’t even remember what the last one was! One reason of course was my computer issues, and the other was a lack of crafting time. I finally got back into some crafting in April, but it was slow going. Back at the beginning of the month I decided to join the Spring Stitch Along hosted by The Crochet Crowd and sponsored by Joann Fabrics and Crafts. The deadline for entering into their contest is today, and while I finished my blanket a week ago, I decided not to enter the contest because I was too lazy to block my afghan when it was finished.

This stitch along was a mystery afghan, which consisted of 4 squares, each a different pattern. The original design called for 3 colours of yarn, but I was trying to use up some of my stash, so I chose one colour to start, then used an online tool to select some coordinating colours which matched some of the other yarn in my stash. I think I ended up with 6 different colours in total.

Of the four sampler squares, my favourite is the one with the cables (bottom left). My least favourite is probably the one with what seemed like a million popcorns (top right). I don’t mind the stitch itself, but I disliked that there were so many of them, and it felt like that square took forever to complete. The most interesting square is probably the one on the bottom right where there is a kind of braid technique in the corners. 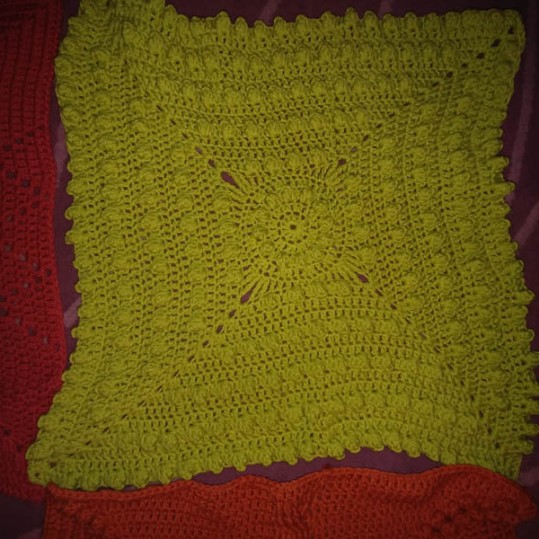 Once all my squares were complete I sewed them all together then used another colour to start the border. I really wanted to bring some of the colours from the squares into the border, unfortunately I only had enough of the first colour to add a couple of stripes. I only had enough of each of the other colours to make it around 3/4 of the way, so those colours were out of the question.

I’ve decided that it’s not my favourite blanket but it was fun trying the different patterns, I love the bright colours, and Truffles seems to like it. It will be something cosy to curl up with on a chilly night and that’s good enough for me.