Only a few more days left for my Advent Calendar! In some ways I’ll miss blogging every day, and in others I’ll be happy to go back to my average of 2-3 posts per week. It’s been hard to find time to craft since I started blogging about tea every day, so as a result, my blog has been pretty craft free this month. And I have to say, I’m feeling the pain! I think I’m going through craft withdrawal or something!

Today’s tea is Carrot Cupcake. Sounds yummy doesn’t it? Carrot Cupcake is a rooibos tea, which according to the ingredient list contains carrot, rooibos, cinnamon, apple, licorice root, cocoa shells, whipped cream, and apple flavouring. The tea in the tin looked plenty carroty, and it smelled delicious; sweet, and cake like, with a hit of cinnamon. 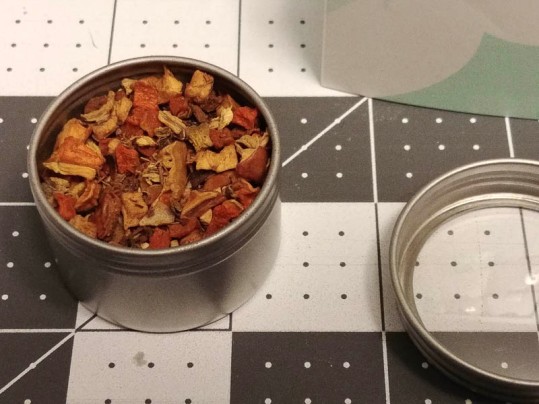 I steeped this tea with nearly boiling water for about 5 minutes. (I forgot to set the timer, so I’m guess-timating.) Today was just not my tea making day. I decided that since it’s getting so much closer to Christmas I would pull out the only truly Christmasy teapot I own. My mom gave it to me, and really it’s more decorative than useful, but I thought I would give it a try anyway.

Because I don’t have an infuser for this one, I used my clear steeper because it allows me to drain the tea through the bottom into any container. To warm up the pot, I added hot water to it while the tea steeped in the steeper. Now, the whole time I was pouring hot water into it, I was telling myself, “Don’t forget to dump the water out before you drain the tea out of the steeper.” But of course I got busy and forget to set the timer, and then I thought it was time to stop steeping so I started to drain the tea into the pot…and I wondered why it was so full when there was still lots of tea in the steeper….yep you guessed it, I forgot to dump out the water. So I drained the rest of the tea into another container and decided I would have that and then see if the watered down tea was still any good.

The tea was actually not bad, even with the additional water added it didn’t seem to dilute the flavour too badly. It tasted creamy with a little bit of spice, and sweetness. Kind of like carrot cake! I haven’t had many rooibos teas that I didn’t like, and this one is no exception. I would definitely drink this one again…without the extra water.